A quick-thinking dad who delivered his baby daughter at home on the bathroom floor used his Apple headphones to tie off the tot’s umbilical cord.

Richard Cox has spoken of how he helped his wife Hayley give birth to early arrival Emilie, crediting staff from the Scottish Ambulance Service with saving her life.

“It all happened so quickly – my wife went into labour late at night and before I had time to dial for an ambulance she’d been born.

“After Emilie arrived, I rang 999 and the call-handler said I needed to find a bit of string – such as a shoelace – to tie up the umbilical cord,” said the 31-year-old bank worker, from Dunfermline.

“The only thing I could find was my iPhone earphones – I tied them to the cord and it was fine. The call taker deserves all the credit.

“All while this happened, she was asking, is the baby breathing; Is the baby okay? With all the noise in the background, she could have lost her cool as well.

“We had it in our mind that the child was not going to be breathing. All the actions of the Scottish Ambulance Service ensured that our little girl survived and I can never thank them enough.”

Tying the umbilical cord is vital to ensuring a newborn’s survival, preventing mum and baby from developing a potentially deadly infection.

Richard said everything he did was a “natural instinct”, and once everything was fine with their newborn, he calmed his son.

The couple were at their Rosyth home, near Dunfermline, when the Hayley started to experience ‘intense’ pain, lasting about 45 minutes. It was the beginning of January and the baby was not due until February 27

The couple’s first child, two-year-old Liam, was asleep at the time. Stay-at-home mum Hayley, 32, was in the bathroom when she called out for her husband.

Richard, who has general first aid experience, said: “She said ‘can you come to the bathroom? Within a few minutes, I had our baby in my hands. My wife then said you need to phone 999.”

The emergency call was taken by Jodie Craig and an ambulance was dispatched by Supervisor, Lynne Walker.

Hayley added: “Our other child Liam was asleep and woke when he heard her crying.”

Richard said: “They walked in the house when everything was so calm. One of the guys said that out of all the homes where babies have been delivered they have never been to one where it was so calm.

“Everyone played their part, from the call taker to the paramedics. They asked if I wanted to cut the cord; they were all really welcoming, and very reassuring. You never think you will be in this situation.

“It happened too fast, I could not grab the phone to call 999. At the hospital, I was saying I cannot believe this. I cannot remember if she was head first or what.

“The main priority was making sure she was breathing, and making sure her face was wiped. I did not appreciate she was born until the ambulance arrived. It’s amazing how your instinct takes over.

“If not for the call handler and paramedics, she would not be here now.”

The couple said they have huge respect for the ambulance service, with Richard adding: “The ambulance service has an overwhelming job and they are all heroes. If we were in another country, if we didn’t have the NHS, she might not be here today.”

Six months on from the birth, Emilie is doing really well, said the couple. She now weighs 16lbs 12oz. Emilie came home after a few weeks at the Special Care Baby Unit (SCBU) in Kirkcaldy. 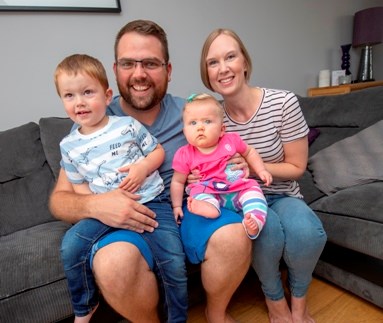