A fifteen-year-old from Aberdeen has been presented with a Certificate of Commendation from the Scottish Ambulance Service, following his brave actions in saving a young girl, which earned him a Local Hero Award at the Inspiring Aberdeen Awards 2021.

Alfie Fraser was presented with his certificate by Area Service Manager Keith Jensen and Aberdeen Paramedic Valerie Bruce, who nominated Alfie for the Local Hero Award following his actions on a snowy day in February 2021.

When eleven-year-old Evie Collie fell down a steep hill and seriously injured herself, Alfie, who was nearby, called 999 for help and stayed with Evie until her parents arrived to comfort her. Alfie then stayed to help the paramedic crew, Valerie and Phil Gobey, when they arrived, making several trips from the ambulance carrying equipment through deep snow in the cold, and then assisting the crew in carrying Evie to the ambulance.

Alfie also got the chance to be reunited with Evie and her parents, who passed on their thanks to him for his assistance.

Alfie says: “I saw what had happened and knew she must have been badly hurt so I had to act quickly. And I was glad I was there to help.”

Scottish Ambulance Service paramedic Valerie Bruce said: “Alfie had no gloves, and was wearing just trainers, and yet he battled against the elements to help us get Evie to safety.

“In all my years of being in the Service I’ve never come across such a helpful member of the public and one so young. Getting this critically-injured child to hospital was only made possible with Alfie’s help. It was lovely to see Evie’s smiling face, and that she has made a full recovery from her injuries.”

Evie’s mum Marlene said: “We would like to say a big thanks to Alfie for helping Evie and he really deserved this certificate. We would like to say a huge thank you to the Paramedics Valerie and Phil who attended to Evie at the scene of her accident and on transfer to ED. They were very kind, maintaining a professional, calm and reassuring manner in what was such a frightening and stressful situation for us as a family.

Also a huge thank you to the team at ED in ARI along with the HDU team at Royal Aberdeen Children’s Hospital. We are so very fortunate to have such skilled medics, paramedics and the Scottish Ambulance Service who face extreme pressures, especially in the current challenging climate.” 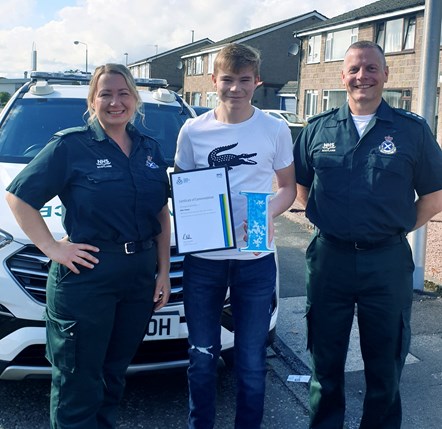 Alfie with Valerie and Keith Jensen 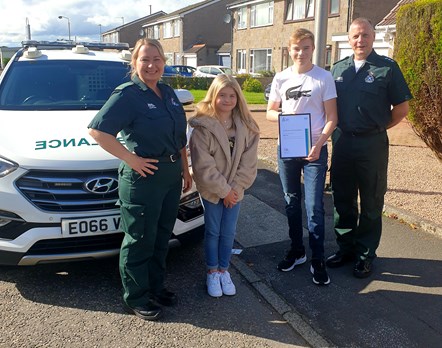