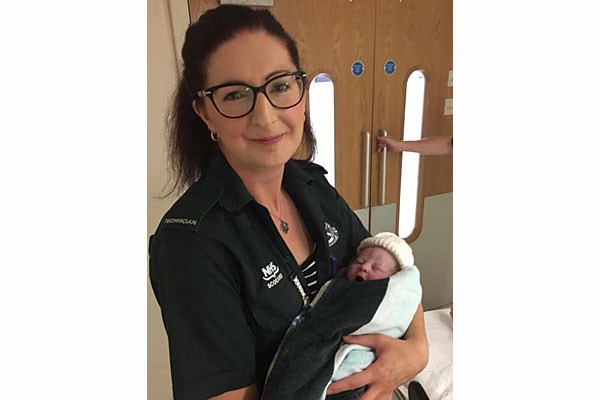 A couple have named their newborn after the Scottish Ambulance Service emergency responder who helped with the baby’s delivery.

Phill and Michelle Douglas have given their daughter Ashley the middle name Rachel, as thanks to technician Rachel Mackie, who was dispatched from Arrochar station.

The Garelochhead mum and dad were at home when Michelle started having contractions. Phill, a firefighter, made an emergency call and an ambulance was quickly dispatched. Worrying he might have to deliver the baby himself, the call taker kept him on the phone, ready to give him expert instructions in the event the baby appeared.

The couple’s other children, Kyle, six, and Ayden, three, were looked after by a family member.

“They started taking us to the Royal Alexandra Hospital, in Paisley. They thought we would get there comfortably,” said Phill.

However, the ambulance only got as far as Helensburgh before it was obvious the baby was going to make an early appearance.

He added: “Rachel was in the back of the ambulance looking after Michelle. She asked Darren to pull over because the baby’s head was out. Darren pulled over – incredibly, right across the road from Victoria Hall, where we’d got married.

“They were both amazing and just made the birth perfect. Not only do they save lives, they help bring them into the world.

“This is something we will never forget. Everyone was amazing, I cannot fault them at all.”

On deciding to give their baby the name Rachel, Phill explained: “We did not know what her first name or middle name would be. It just fitted.”

Rachel, who has been with SAS for 11 years, described the family’s gesture as an “honour”. She also added it was her first time delivering a child.

“We were notified of a red call; a woman was pregnant but we did not know the birth was imminent,” said Rachel.

“They got in the back of the ambulance and we thought we’d make it to Paisley, but after about 10 minutes, we saw that the baby was coming.

“It was a brilliant first experience for me – I could not get a better experience. I’ve been a technician for 11 years, and never managed a delivery yet – it was Darren’s ninth.”

On the couple naming the child after her, she said: “It was an honour and a privilege. A fantastic experience. I will always remember this  - it made quite an impact.”