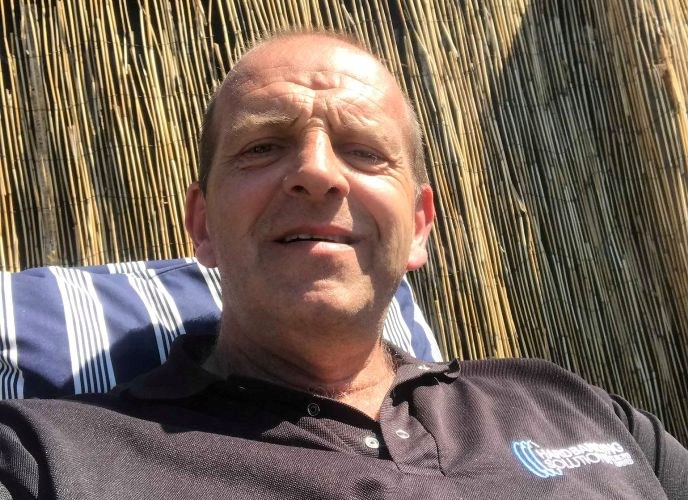 A dad-of-three has sent a heartfelt thank you to the Scottish Ambulance Service staff who “miraculously” saved his life after he had 15 cardiac arrests in three hours.

Ian Clark was at his Elrick property on August 15 last year when just after 5pm, the forklift driver put some soup on. He was with home with his wife Carole and his youngest son, Kaiden, 12.

But after just finishing his soup, Ian, 52, experienced his first cardiac arrest, terrifying his wife and son.

An emergency call was made to 999 by his wife, with an ambulance crew from Huntly – Deborah Cameron and Claire Allan - quickly dispatched. The crew also had assistance by Aberdeen’s Paramedic Response Unit, manned by Calum Moir.

Ian explained: “My wife called 999 – I had just finished my chicken and sweetcorn soup, and then I fell and caught my eye socket on the fireplace. That’s when my heart stopped.”

In the meantime, Ian’s eldest son Connon, 21, was at a nearby gym, with Ian adding: “But he could not get out of the car park.

“My youngest son, Kaiden, had called him while my wife was at the home on the phone to the ambulance service.”

Connon soon arrived and performed CPR on his dad until the ambulance service’s first crew arrived.

Ian said he had three cardiac arrests at his house, three in the ambulance and the rest were in the accident and emergency department at Aberdeen Royal Infirmary.

He added: “This is all happened in the space of two or three hours.”
Ian, once at hospital, was put in an induced coma, adding that after his initial collapse the next thing he remembers is “waking up in hospital”.

He continued: “I remember having my soup and then the next thing I know I’m in intensive care. I thought I had been in a crash. I was coming out of the anesthetic, and I had a lot of pipes in.

“I wanted to cough, and all my ribs were broken. People were saying I had a cardiac arrest but it didn’t mean anything to me. It was scary for my wife as well – I went down like a tonne of bricks.”

The dad-of-three said later while he was in hospital, he was taken aside by a doctor to explain what had happened.

He added: “He said what happened was very rare and I had to ask him around six times if he was sure. I asked him ‘are you sure you haven’t got me mixed up with someone else – I did not believe it.

“I was very, very emotional. I felt so lucky to be alive. It still gets me emotional today when I think about it. Someone was looking over me that day.”

At the operating theatre, he had an ICD (Implantable cardioverter defibrillator) fitted, with Ian adding: “This is just in case my heart stops – it gives me an electric shock. Since returning home, I have been fantastic.

“This was all terrifying. The scariest thing was when they took me down to the operating theatre.

“I am 100% thankful to the ambulance service staff. Very, very thankful for the small mercies.

“I just want to thank everyone for helping me, the doctors, the nurses, paramedics. I might not be here today if it wasn’t for everyone. There’s nothing in the world I could give back to them – they save my life. My heart just stopped. It’s a miracle, definitely a miracle.”

Ian returned home on August 29, where he is now recovering, “doing a lot of gardening to occupy the time”.

Area service manager for Grampian Ewan Murray said: “It is great to hear Ian’s story and how he was assisted by the crew at Huntly, and by the Paramedic Response Unit from Aberdeen.

“Our staff, including our call handlers and dispatchers, are trained to deal with life-threatening situations on a daily basis and encounter man challenging incidents.

"They do it day-in, day out with no expectation any reward, so to get thanks from Ian, is wonderful to hear. I hope Ian continues his recovery.”