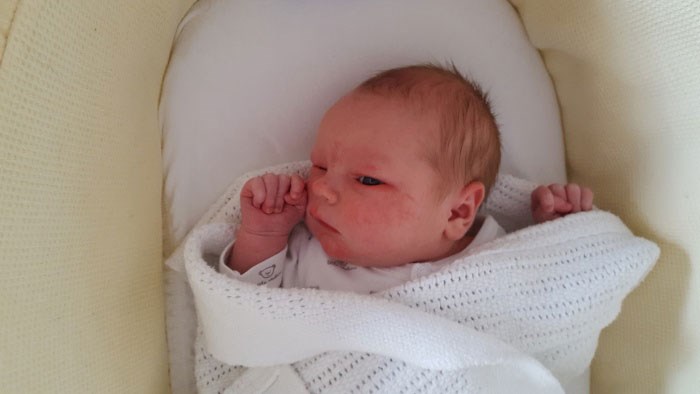 A mum who gave birth in a layby has been reunited with the Scottish Ambulance Service paramedics who helped her deliver her second child.

Keryn Laver, of Oakley, near Dunfermline, gave birth to her first child Torin three years ago. The birth took 27 hours. Last year, in March, she was pregnant with her second child and was due to give birth on March 11.

However, at around 8pm on March 7, the 39-year-old phoned Victoria Hospital in Kirkcaldy to say that contractions had started and were happening around every two minutes.

She said: “The hospital told me to get in fast. The contractions got closer together and I phoned a babysitter.

“I told them ‘you will have to come here very quickly – the baby is coming. I was sitting on the couch at home, and my husband Jules was with me.

“The babysitter took about 20 minutes to arrive – the contractions were coming so fast and then my water broke as I was getting into the car. We were in the car and I was screaming. My husband started driving me to hospital.

“Jules called 999 at around 8.45pm – they could hear me in the background. I was in the front seat and I still had my jeans on. The call taker asked Jules if he could see anything, whether I was dilated or if he could see the baby’s head.

“They said they would send an ambulance as quickly as they could. The ambulance came around the corner and must have heard me from the car.”

As she was put on to the stretcher by paramedics Andrew Paterson and Richard Garside, based at Dunfermline, the baby’s head was out. The call taker was Dominic Reynolds-Cowie, based at the ambulance service’s west control centre, and the dispatcher was Lorraine Robinson, based at our east ACC.

The paramedic crew, on their first job for the night, helped deliver the baby at 9.03pm, perfectly healthy, at 8lb 6oz.

Keryn added: “Holding this little baby, I was full of joy. I think for my husband it was a huge relief that he did not have to deliver it. He had to drive himself to the hospital, but he saw the baby being born.

“Jules took some time to compose himself, he was keeping it together, but it was so close to him having to deliver the baby in the car. He had to keep calm, but once the crew arrived, he could enjoy the birth and then all the emotions hit.”

Keryn said it was a “totally different experience” to the birth of her first child.

She explained: “With my first baby, I didn’t know what to expect, and it was a really long labour. I prefer a quick birth.”

After her second birth, she said she could have been home that night but she was kept in Victoria overnight, arriving home the next morning.

Keryn continued: “The crew was really surprised, and they were very good with both of us; they were joking with me, and supportive of Jules. They gave me whatever I needed.”

Andrew also gave Keldan a knitted beanie, made by the paramedic’s grandmother, and kept in the back of the ambulance for such occasions.

The day of Keldan’s birth has an extra special significance for Keryn; it was the day her brother, Cedric, passed away in 2009 after a sailing accident.

Now, the Oakley mum said March 7 has a different meaning these days, adding: “It changes a bitter day and turns it into a happy day.

“Every time his birthday comes around, we will tell the story – it will be told at his 21st birthday.

“Torin was quite pleased to meet his baby brother. It took a while to realise it happened so quickly.”

In memory of her brother, Keryn named her second child Keldan Cedric Laver.

As a thank you, the mum sent the crew a card to thank them and let them know Keldan was healthy.

Last week, on Thursday, June 21, was the first time Keldan had met the crew.

Keryn said: “It was great to see Richard and Andy again. In the card I sent, I thanked them for helping our baby boy into the world. It was a very, very memorable birth and I am absolutely pleased it turned out the way it did. We are lucky it was very straight forward.”

Richard, who has since been seconded to Helimed 76 as an air ambulance paramedic, said: “It was our first job of the night.

“As the patient was in a car, in a layby, in labour we knew the birth was imminent so we got there quickly.

“We were just in time to be able to get mum into the ambulance where the baby was born. A couple of minutes slower and the baby would have been born in the car footwell. All went well and the baby got a wee hat knitted by Andy’s gran.”