Half a million people in Scotland have been equipped in vital life-saving CPR since 2015, it was announced today on Restart a Heart Day (October 16)

Restart a Heart Day – part of the Resuscitation Council’s Restart a Heart Campaign - is the annual worldwide campaign which strives to raise awareness of cardiac arrests and increase the number of people equipped in CPR.

Today, organisations all over the world will come together to increase public awareness of cardiac arrests and increase the number of people trained in life saving CPR by organising and facilitating training events. Prompt bystander CPR can increase the likelihood of survival after Out of Hospital Cardiac Arrest(OHCA) by 2 or 3 times.

In 2015, to support Scotland’s unique national strategy to improve survival following OHCA, Save A Life For Scotland (SALFS)- a collaboration of emergency services, third sector organisations and the Scottish Government–was launched, to publicise the strategy and create increase the number of people available to do bystander CPR by co-ordinating half a million people become CPR ready by 2020.

The news that 500,000 people have been equipped with CPR has been widely celebrated.

Scottish Ambulance Service Medical Director Dr Jim Ward said: “This is wonderful news and it is thanks to the commitment of many organisations across Scotland working in partnership, and particularly to those members of the public who have come forward in huge numbers to be trained in CPR. Fast action is critical to save the life of a person in cardiac arrest, and without prompt CPR the chances of surviving cardiac arrest are very low.

“Out-of-Hospital Cardiac Arrest (OHCA) is a significant healthcare challenge in Scotland. The Scottish Ambulance Service responds to around 3,500 people in cardiac arrest each year. At the launch of Scotland’s national OHCA strategy in 2015, around 1 in 20 survived to hospital discharge - this is now around 1 in 12 and continuing to improve. Phone 999 and start CPR are the critical actions when you suspect that a person has had a sudden cardiac arrest.”

Lisa MacInnes, Director of the Save a Life for Scotland campaign, said: “In October 2015 we set out on a journey together as a partnership to raise awareness of cardiac arrest and help people living in Scotland get CPR ready. At the time, the target of reaching 500,000 seemed a long way off. However, with the hard work and dedication of the fantastic Save a Life for Scotland partnership we have surpassed this milestone over a year ahead of schedule and we're keeping on counting aiming to reach as many people as we can.

"This amazing achievement belongs to every person who helped spread the life-saving message of CPR across communities throughout Scotland and especially the 500,000 folks living in Scotland who took time to stop and learn. Working in partnership together really has saved lives. However, today’s achievement is about more than numbers. Let’s continue to change Scotland’s culture around CPR one person at a time, because every life matters.”

The Scottish Ambulance Service has around 1200 volunteer Community First Responders, aligned to approx 130 CFR groups across Scotland, who are all equipped in life-saving CPR. They are highly valued by the Scottish Ambulance Service and are a dedicated, motivated and valuable asset to the communities they serve. They form an integral part of the Service’s response, especially but not solely, to Out of Hospital Cardiac Arrests (OHCA).

Along with CFR groups, Scottish Ambulance Service staff also volunteer in their own spare time at a range of events to help people become CPR ready, which includes visits to schools, community groups and businesses, teaching a range of ages. These visits have been vital in efforts to get half a million people equipped.

As well as the 500,000 milestone, this year has also seen the introduction of the GoodSAM app, which alerts volunteer cardiac responders to someone in cardiac arrest and which will be rolled out widely in the coming months, and also the launch of the British Heart Foundation’s National Defib Network ’The Circuit’, which aims to map all of the UK’s defibrillators on a single database, ensuring they are ‘visible’ to the call taker to allow them to sign post the caller to them at the time of need.

David Farries is the Scottish Fire and Rescue Service’s Deputy Assistant Chief Officer for the North of Scotland and has helped oversee efforts to share CPR skills with communities across Scotland.

He said: “Firefighters have worked tirelessly to help contribute to this milestone figure.Our crews have welcomed members of the public into local stations and have attended a whole host of community events to demonstrate CPR techniques.Ultimately, we hope by sharing CPR skills and knowledge, we can make people more confident and therefore more likely to intervene in a real life emergency.

“We’re committed to helping to preserve life – that is why we are so keen to engage with all members of our communities to share this crucial advice.Performing immediate CPR can keep oxygen circulating around the body until the arrival of medical professionals or a defibrillator. That’s why it’s so important for as many people as possible to be trained in CPR. By taking just a little time out of your day to learn this skill you could end up saving someone’s life.”

Public Health Minister Joe FitzPatrick said: ““It’s fantastic news that our aim to equip an additional 500,000 people with CPR skills has been reached ahead of schedule.

“Starting CPR immediately after the heart stops beating can double, and sometimes triple the chances of survival.

“This joint campaign with public and voluntary services is an excellent example of how we can all work together to improve a person’s chance of survival.I would encourage everyone to learn CPR because any CPR beats no CPR.”

Find out more and get CPR ready by visiting www.savealife.scot 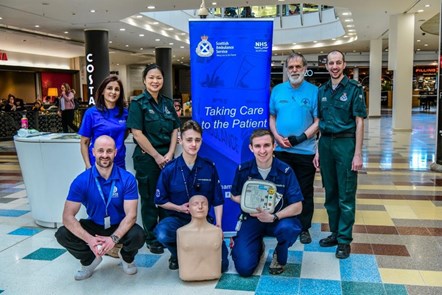