A baby girl born on the bathroom floor after an emergency labour has been presented with a birthday gift by the Tayside ambulance crew that delivered her.

Baby Bella appeared unexpectedly in September last year when mum Grace’s labour suddenly went ‘from 0 to 100’ in a short time in the early hours of 22 September 2018.

Recently Bella, mum Grace Thomson, 28, and dad Paul, 32, were reunited with paramedic Nathan Thomson and technician Pamela Fisher, both based at Perth, who presented Bella with a 1st birthday present.

Grace, of Perth, spoke about how she quickly went into labour last year: “It was evident we needed urgent help as I was getting a strong urge to push. Paul was advised to call an ambulance and the operator on the phone could not have been more helpful in calming Paul down and telling him what to gather in case the baby made an entrance before the paramedics arrived.

“Thankfully the ambulance arrived before Paul had to think about delivering the baby.”

She described lying on the bathroom floor as “one of the scariest moments of my life”, but this abated once the crew arrived.

Grace added: “They were so calm. Not only were they attentive with myself, but they also looked after Paul who you can imagine was frantic at the time. After only seemed like a few pushes, I gave birth to a healthy baby girl.”

Grace said Paul got the chance to cut the newborn’s cord and the couple were taken to Perth Royal Infirmary with Bella, before they were transferred to Ninewells Hospital. A year after the dramatic birth, she received a text message from Nathan asking how Bella was, and if he and Pamela could drop off a present.

She added: “This for us was one of the kindest thoughtful gestures we have ever had and definitely brought a lot of emotions back - I take my hat off for the work they do but also going that extra mile.”

Nathan said: “We arrived to find Grace on her bathroom floor trying to push. Our initial thoughts were to get mum down into the ambulance and up to hospital but, when we did our checks, we found that the baby’s head was appearing. Within minutes and a couple of pushes from Grace, Bella was born on their bathroom floor.”

Pamela has added: “Grace was amazing that night, and we were so grateful to be given the chance to go back a year later to meet Bella and catch up with Grace. That’s a nightshift I won’t forget!” 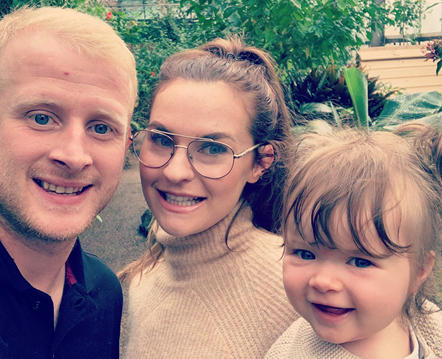