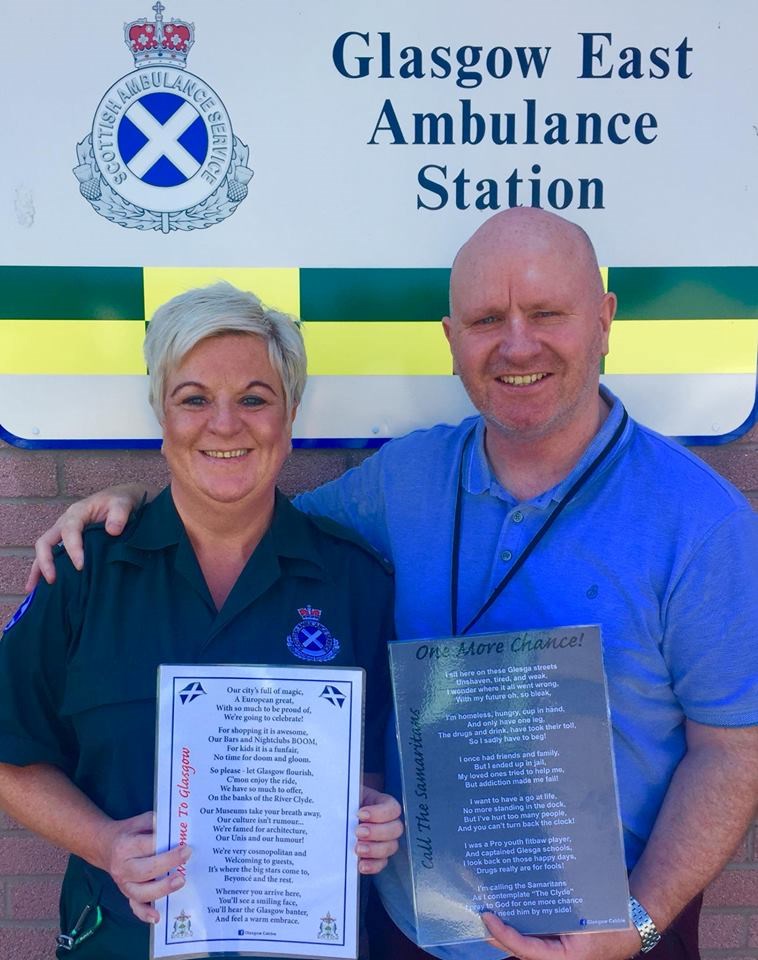 A Glasgow cabbie stabbed with a knife and assaulted with a meat cleaver in a brutal unprovoked attack has been reunited with one of the Scottish Ambulance Service paramedics who saved his life 12 years ago.

Stef Shaw, who used to run a beer delivery business before the assault, was attending his nephew’s 25th birthday party in January 2006 when three men burst into the house and launched a frenzied assault using a meat-cleaver, knives and nun-chucks on guests.

One of the thugs aimed a cleaver at his head. He blocked it, but the weapon caught his elbow, slicing it open. He was then stabbed in the side with a knife.

The dad-of-two, 51, sustained a stab wound to his abdomen which ruptured the mesenteric artery, the body’s main blood supply to the bowels.

Three men were jailed over the horrific attack in August 2006.

It cost Stef, of Glasgow’s Baillieston area his business and left him with post traumatic stress disorder. To this day, he still has recurring bad dreams.

Stef had never got a chance to thank the ambulance crew in person, despite offering his thanks to ambulance service staff when he saw them.

However, while popping into Glasgow East Station earlier this week, he ran into Suzy Hope, who along with George Glass, came to his aid.

“The pair, who were just pulling into their station to have a break, ended up saving his life.

He said: “I asked her ‘do you recognise me at all?’ She said ‘yes, you are the taxi driver who was stabbed’.

“She remembered me straight away. It was a wee bit emotional, explaining how ill I had been. It was an unprovoked attack from people who I had never seen in my life.

“I still get a little bit emotional when I think about it. It left me very ill – I almost died.”

As soon as the emergency call came in, Suzy and technician George Glass, now retired, were dispatched to the scene, arriving in around 90 seconds.

It was this quick response time which was paramount in saving his life.

Suzy said the time it took to get him to hospital from the initial call was 12 minutes. If not for such a quick response, Stef might not have survived.

A fact not lost of Stef either. He said: “The quick time it took them to arrive was absolutely paramount to my survival.

“I may not have survived if they hadn’t arrived so quickly. The paramedics saved my life that day. I am here because of the paramedics and I have also had massive support from the NHS.”

He said the event has had a big physiological damage on him, but he has successfully rebuilt his life, and has become an online sensation after writing poetry.

She explained: “We had only just made it to the station gate when we received a 999 call, which advised that three persons had been attacked in an unprovoked assault, utilising weapons.

“On entering the property, it was evident that weapons had been used on three victims. We quickly established our patient priorities by triaging all three victims and came to the conclusion that Stef, who was lying on the floor, semi conscious and bleeding profusely from a variety of wounds, was most in need.

“We worked quickly to try to stem the bleeding, and were quickly assisted by PRU operative paramedic Team Leader Ian Stewart, who is now retired.

“Stef’s condition was unstable, and critical. I remember Stef begging me not let him die - he told me he had two kids.

“It was great to have a visit from Stef. He has always been very grateful that we saved him from life limiting injuries or in fact death.

“We don't really see it like that, we were just doing what we do, the best that we can do it.

Meanwhile, Stef has also urged people to get behind a campaign called “Think Again”. Its aim is to have vandal proof, emergency lifeline telephones with clear Samaritan signage on the banks of the River Clyde in Glasgow.

He said these would “life-saving telephones” will have a direct link to the Samaritans and emergency services.

Stef said: “If we can save just one life, the whole campaign will be worth it. We can then work at saving more lives.”

The cabbie is set to attend a meeting of the Glasgow Water Safety Group at Glasgow City Council on 10 July, where he will present his proposals.

Suzy added: “I wish him all the best for the future, and the best of luck with his campaign.”