Matt Jones, 40, was driving on the A82, just south of South Laggan, with his eight-year-old son, Jack in the back seat when the two vehicles collided.

The dad has spoken for the first time about the accident, which he recalls little about, praising Scottish Ambulance Service for saving his life.

In a letter sent to the Scottish Ambulance Service crews in the north, Matt wrote: “I can't really begin to describe the gratitude I feel, and will always feel to you for what you did for myself and my son Jack, on that day, there are times in life were words can't really convey enough.

“You did an amazing job and I am stunned, having seen photos of the car, that I wasn't killed outright.”

He continued: “I wish all of you the best of luck in all you do and the every success in life. I am forever indebted to you for this second crack at life - it's the greatest gift I've ever received.

Speaking about the crash on May 27, Matt says all he recalls is waking up in hospital the following day.

Matt was taking Jack to see his parents (Jack’s grandparents) in Glenelg.

He said: “We got to Fort William about 3pm and that is literally my last memory of the day. The first week in hospital was a blur - I was on very strong pain killers.

“My memories of the day are very hazy. I went from never having broken bone in my body to breaking an awful lot.”

As a result, Matt broke his right ankle, his left femur, his pelvis and seven ribs. He also burst his spleen, the metacarpal bones in his left hand, and his right humerus in his shoulder “shattered into pieces”.

His son, who was in the back seat, “got off lightly”, only suffering a cut to his cheek.

Since his recovery, Matt has been told of what happened through various means. Matt, of Northampton, said he didn’t fully realise how bad the wreckage was until he saw the car at a car yard.

He added: “I was trapped for a considerable amount of time.”

The Scottish Ambulance Service dispatched several crews to the scene; they included paramedic team leader Andy Davidson, Gary Blackmore and Clare Macleod, both paramedics, who are all based at Fort William station.

Alan Knox, Area Service Manager, also attended along with the Coastguard helicopter and an A and E Trauma nurse from the Belford Hospital.

Matt said over time has found out what happened on the day, finding it “weird” trying to piece together what happened.

He added: “It’s scary – there’s a period of time where I have no recollection of my life at all.”

The outdoor instructor has since spent the past three months recovering. Initially on crutches, he can now walk freely on his own.

He added: “I walked five miles the other day. I intend to do some sort of fundraising actively for everyone who involved once I can. I fully intend to do some as soon as I can climb - I am incredibly lucky to be alive and I want to thank everyone for keeping me alive.”

After seeing the wreckage of his car, he said he “horrified” to see the aftermath.

He added: “It did not look like there was space for a human being. The front side of the driver’s side had gone. I think seeing the car was when I realised how bad the accident was.”

He explained: “His car had frontal damage and the patient was trapped in the driver’s seat for about an hour. The whole front of the car had come forward to his legs. The compartment was crushed.”

Andy, 53, said once he was extricated, he needed urgent medical help, and was rushed to hospital at Raigmore Hospital Inverness by Coastguard

He added: “His condition was deteriorating. I was speaking to him but he probably does not recollect it.”

Andy said the quick response and work by the Scottish Fire and Rescue Team to access the trapped patient and airlifting him directly to a trauma unit at Inverness probably made a difference to saving his life. 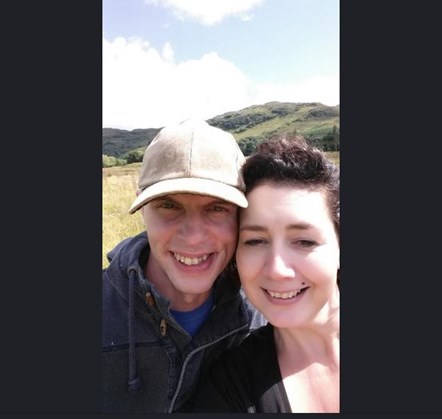