A woman who survived a road crash along with her mum and dog has thanked the Scottish Ambulance Service emergency responders who rushed to her aid.

Sarah Kennedy, of Fort William, was travelling on the Dalwhinnie Road, along with mum, Theresa Kennedy, and her dog, Todd, a Romanian rescue dog, when they collided with a lorry sending them flying into a ditch.

Sarah, who is 31 and works in a dental laboratory in Manchester, said: “We were behind the lorry travelling to Fort William, as this is where we are from. We kept our distance from the lorry – the road isn’t that great as it is narrow and bendy.

“The lorry slowed down and indicated, which we both thought the driver was letting us over take as it was holding us back.

“The road ahead was clear so my mum began overtaking the lorry. As the front of the car got past the lorry it decided to turn sharply, hitting us from the side, which sent us into a spin – the car hit the back of the fence and sent us straight into the verge on the other side of the road and into a ditch.”

Two crews were dispatched to the crash; one from Aviemore, manned by Stuart Beaton and student technicians, Rhona-May Lawrie and Bridie Thomson, and the other was from Kingussie, which was manned by Victoria Emslie and Gordon Bryan.

Sarah said she was “stunned”, as the car had been “flung” about.

She added: “Mum was complaining of chest pains, and hyperventilating. I managed to get my seat belt off to see to her. We both got out of the car and mum was taken into a passer by’s car as she was in shock.”

Sarah said the crews arrived very quickly, and praised them for their efforts.

She added: “My mum was taken into one ambulance and I was taken into another. Only shortly after I had seen to my mum and the car, I realised I had hurt my back and neck - I have previous neck injuries from another car crash years ago.

“The ambulance crew were quick to get me all strapped in and secure. En route to Inverness, they were very friendly, keeping me talking and updating me on what was going on. We were both checked over and both released from hospital a few hours later with whiplash and bruising.

“The team were outstanding and they made us both feel very safe. There were students on the call with the ambulance crew and I couldn’t fault them. Thanks to all of you.” 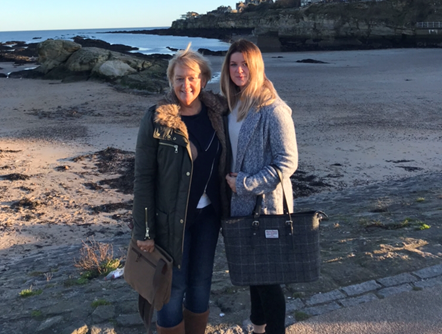