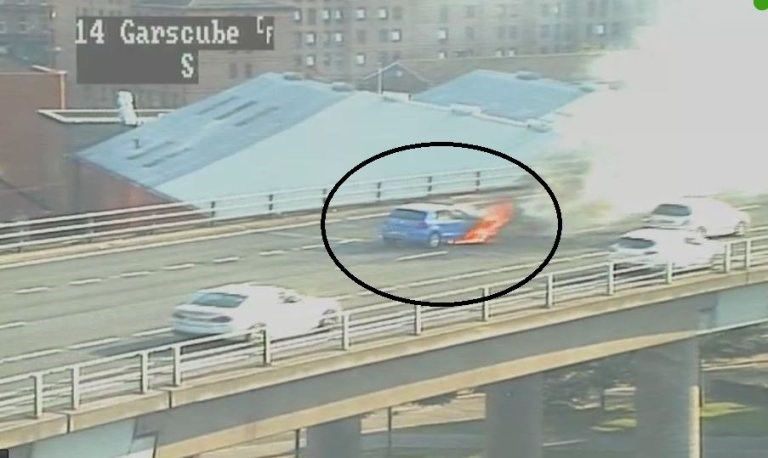 Family helped out of car before vehicle explodes

A Scottish Ambulance Service control centre worker has been praised for assisting a family from their car moments before it burst into flames on the M8.

Ashley Johnstone was driving into Glasgow with her two sons, eight, and six, when her car broke down at around 6.30pm. The family was on their way to a holiday.

They were stuck in the middle lane of the busy motorway, at junction 17, when Suzanne Brown was on her way to work at SAS’s ACC base at Cardonald when she spotted Ashley and the two children in the vehicle.

Ashley said: “We were stuck in the middle lane of the flyover. There was smoke coming out of the bonnet. I jumped out to get the kids out of the back of the car. Suzanne then pulled in front of my car.”

Ashley said the SAS control centre manager got out of her vehicle and offered for the family to come to her car, where they were driven over to the shoulder of the M8.

She added: “It was obvious that it was about to go up in flames – there was a lot of smoke coming out. Suzanne took control of the situation straight away.”

Police Scotland and the Fire Service were called while the family and Suzanne were safe from the smoking car.

Ashley added: “It went up in flames – it was awful, I didn’t know what caused it, but it was reassuring that we were safe.

If we were still on the motorway it could have been a lot worse. Suzanne was very calm, and it felt like she took control of the situation. It could have been different if no one had come to help.”

Suzanne described the incident as a “shock” and added: “I came up beside the Polo, which had ground to a halt. There was a loud noise coming out of the car and it started to smoke. It was right in the middle lane.

“I pulled in front and reversed my car to her car. Ashley got out of the car and I went to help her two boys out, but they got themselves out. The traffic had not stopped and the car was ready to blow up. My car was on the outside lane and then the car exploded – it just disintegrated.

“It started at the front, the windscreen blew up, then the rest of the car disintegrated. We were away at that point.

“I don’t think what I did was very brave, I kept playing it down. I have kids of my own and I would not like anyone not to help me. It was quite a shock - it went up in a matter of minutes. We were all lucky we were out of the car when it went up in flames.”

Ashley added: “I am so grateful to Suzanne. She was very good with my two boys. I want to thank her kindness, for stopping and taking control of the situation and for being so calm and reassuring to myself and my boys.” 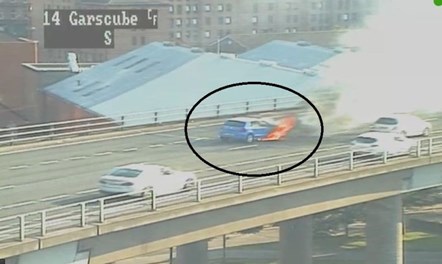