A doting son who saved his dad’s life using CPR after pulling him from a crashed car has thanked the Scottish Ambulance Service for their “amazing” support.

Karl Zimmerman had to crawl over dad Carl, 64, to free him as the automatic vehicle accelerated into another car as it was parked at the roadside in Glasgow.

The 29-year-old joiner, of Govan, dramatically steered the slowly moving car into a hedge, bringing it to a halt, before dragging out his 64-year-old father and performing CPR.

“We’d just been to see Rangers beat Livingston at Ibrox and were driving away from the ground. It was crazy, pure luck – by the grace of God, his front head light was out, he had pulled over and I was checking it. When I came back he was unconscious at the wheel,” said Karl.

“It was an automatic, and the car just started rolling into another car – I managed to turn the wheel and pull it into a hedge. I then climbed over him and dragged him out of the car – I was a bit panicked. ”

Karl, who had learned first aid through his work, started CPR.

“It was all a bit of a blur; instinct just kicked in. The 999 call taker talked me through it. I brought him back once and I will never forget it. He took a breath, and then I just kept going and going,” he added.

Ambulance call taker, Celeste Hill, was put on loudspeaker on Karl’s phone and a couple soon came by to help relay instructions.

“They helped me as I continued doing CPR. The whole thing seemed like a minute, and then the ambulance response arrived – they were brilliant,” he added.

“I could not believe how calm they were. I thought it was the most incredible thing I have ever seen – the ambulance response right through until the aftercare.

“I only did what I had to do – I don’t think it was heroic. It’s something anyone would do in the same situation. If I had not had the call taker speaking to me, I would have gone into panic mode. I knew I had to do something – I knew he was not going to just wake up. Once the ambulance arrived, they took over, and took him into the ambulance..”

After months of recovery, the Rangers fans met one of the crew members thank him in person and are now set for a fresh season watching Rangers at Ibrox.

The pair also praised the response of the Scottish Ambulance Service after it dispatched Scot Christie and Martin Moore, based at Kilmarnock Ambulance Station, to the scene within minutes.

Along with Karl’s daughter, Eva Zimmerman, aged eight, and Carl’s Wife, Christine, they recently met Martin again and were shown around the Ambulance Service’s SCOTSTAR base.

Carl’s family were told by doctors afterwards he only had a 6% chance of surviving.

Karl added: “It’s amazing that he pulled through – it’s a scary statistic. I struggled talking about it at first. I did not feel like I did anything special. I’m proud I saved my dad but I would have done the same for anyone. The emergency services were all amazing – I have nothing but praise.

Technician Martin Moore said: “This incident puts into perspective the importance of good call handling, nearby resources and most importantly bystander CPR. I certainly cannot think of a better example than this incident. I greatly enjoyed being able to speak with Mr Zimmerman in person and for once receive some rare closure from a job that went well. A family still have a husband, dad and granddad due to everyone's excellent work that day.”

David Bywater, of the Scottish Ambulance Service, said: “Out-of-Hospital Cardiac Arrest (OHCA) is a significant healthcare challenge in Scotland. Approximately 3,500 people undergo attempted resuscitation each year after OHCA. At the launch of the national strategy in 2015, around 1 in 20 survived to hospital discharge - this is now around 1 in 12. This is an excellent example of the importance of people learning how to recognise sudden cardiac arrest and being willing to step forward and assist.

“The Chain of Survival describes the crucial elements that can save a life when someone has an OHCA:

“The first three elements described above are the most important links in the Chain of Survival, and are those which can be delivered by members of the public prior to the arrival of the Ambulance service.” 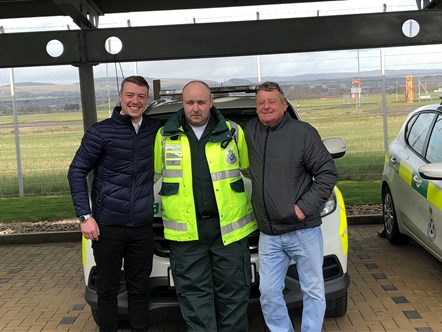