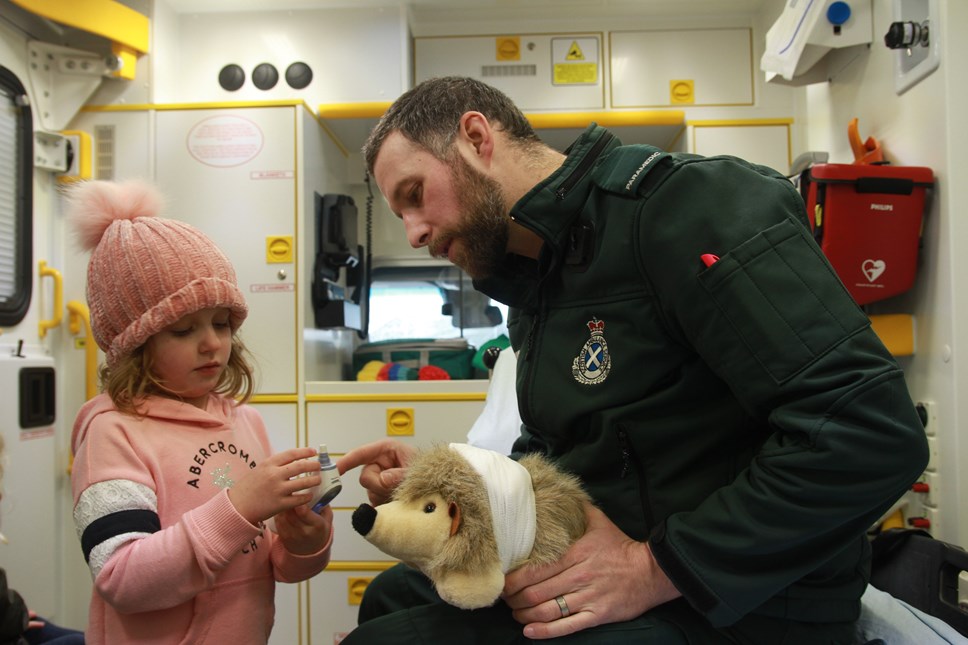 Since then, she has bravely undergone surgery, had a total of 18 months of chemotherapy and undergone various other invasive procedures.

Michael of Monkton, who has been with SAS for 13 years, said his daughter has been an “inspiration”.

“Aoife has been the driving force behind everything we have been doing with the fundraising. We are very proud of her – she puts up with an awful lot given the amount of times she has to attend the hospital. She’s always been a feisty wee woman and that has stood her well,” he said.

“She has a smile that can light up a room. That fight and spirit has helped her along the way, through her surgery and chemo, and everything that goes with it. She just gets on with it and does not complain – she’s definitely a wee inspiration.”

Please visit bit.ly/2VBfQ5L to donate money to MIchael's worthy cause. A Facebook page at bit.ly/2UaZz5V has also been set up.

The youngster is now part of a clinical trial in Great Ormond Street Hospital, London. Since starting the trial drug, the tumour has remained stable.

Michael, 37, based at Kilmarnock Ambulance Station, is now aiming to raise money for a sensory and interactive space at his daughter’s Early Years Centre and Primary school, in Monkton, Prestwick for all the pupils to benefit from.

The room would complement teaching and help all pupils develop their ability to interact with others, learn and solve problems, understand and develop their use of language and improve motor skills. It would also increase motivation, promoting greater levels of happiness and wellbeing.

So far, he has raised around £5,000 from public and local business donations. Applications for funding through incentives like Persimmon Homes community champions and Prestwick and villages locality group have also been successful.

Michael has planned a range of activities for this year, including a Family Fun Day on Sunday the 30thJune at Kilmarnock Rugby Club and a sponsored zip-line across the River Clyde on the 24th August. He is also running in the Glencoe Marathon on the 8th September. His first fundraising event, a Race Night, is on the 13th April – the event, at Kilmarnock Rugby Club, has already sold out all 150 tickets.

Michael, along with Enice Vennard, an Ambulance Care Assistant based in Kilmarnock, recently met with Stagecoach, who have donated a bus.

Once Aoife’s school has been equipped, the intention is to kit the bus out with sensory and interactive equipment and for it to travel around schools in Ayrshire so that other children benefit. Other ambulance stations, the Kilmarnock community, and even further afield, have dug deep to help Michael’s cause. Michael’s cause – A Space to Make Sense of School – has also been accepted as a charity for this year’s Kiltwalk.

Michael, whose fundraising efforts started this year, added: “Kilmarnock is a tight knit station and even around Ayrshire there has been lots of help. There’s been a number of folk from other stations who have come and offered their help and support to us as well – the support we’ve received has been a highlight.”

Aoife was diagnosed with a brain tumour in 2015 on February 19 – high grade glioma represents 10% of all child brain tumours.

Michael, who was at work at the time she was diagnosed, explained: “She was a normal fit and healthy girl and she was down at her child minder’s when she took unwell. At the time, I wasn’t sure what had happened and thought she might have fallen and bumped her head, or maybe collapsed.”

“I was on my day shift, and I had a few missed calls on my phone from Aoife’s childminder to see if could come down in the ambulance to get her. Initially, when I saw her, she didn’t look well but I never thought for a second about what was to unfold.

“Myself and [Ambulance Technician] Caroline Hodge, my crewmate for past seven years, took her to Crosshouse Hospital where she had a scan – that’s when we found out she had a brain tumour and the tumour had caused an intra-ventricular bleed.”

Aoife was transferred to Yorkhill Hospital where she had surgery to have the majority of the tumour removed. A small amount, however, was not able to be taken away, as it was too close to a blood vessel. This is all happened while Michael’s partner, Evelyn, was pregnant with the couple’s second child, Eilidh, now aged three.

Michael added: “We knew something wasn’t right but never in a million years would have thought that’s what it was. We thought it might just be a concussion, but never a brain tumour. It was the worst day of my life, without a doubt.”

Aoife had an operation – lasting around 12 hours – to have the brain tumour removed.

Michael said after the initial surgery, the tumour had been examined in the lab and the family was told it was cancerous. They then had to start preparing her for chemotherapy. Aoife’s clinical trial, ongoing at Great Ormond Street Hospital, involves taking drugs twice a day.

Michael said: “The tumour has been stable since starting the trial drug. It’s not grown, but it has not shrunk. This is definitely good news – as long as it’s not growing, and there are no bad side effects, we are happy.

“She does not really understand what is going on – because of the surgery, it has affected and delayed her development. Her development is getting better and better all the time but I don’t think she knows she’s not well with a brain tumour.

“I think because she has been living with it for most of her life, she thinks it is just normal to go to the hospital all the time.”

Michael said Aoife’s young sister, Eilidh is wary of what is going on, but understands what her sibling is going through, adding: “Eilidh doesn’t know she’s doing it, but when the two of them are playing and having wee chats and arguments about TV programmes, books and toys she is encouraging her big sister to interact and become more vocal. At times they fight, like most sisters probably, but little does she know the help she is giving her big sister.”