A motorbike rider who almost died after smashing into a telecom box has praised the two paramedics who saved his life.

Michael Hallsworth was rescued when a fast-acting team from the Scottish Ambulance Service dashed to the crash site and re-inflated his lungs, enabling him to breathe.

The retired electrical supervisor spent six days in hospital after the incident, which left him with a broken shoulder blade, broken ribs and a collapsed lung.

“When I woke up in hospital the next day, the doctors said if not for the intervention of the paramedics, I would not have survived. I was told my lung had collapsed and they had saved my life,” said Michael, who lives in the Scottish Borders town of Chirnside.

Michael, 64, has spoken for the first time about the horror crash, and about the Scottish Ambulance Service team of Guy Anderson and Stuart Hogg – both based at Kelso Ambulance Station – that saved his life.

Speaking from his home in the Borders, he said: “I was on my way to Hawick when I came past the race course at Kelso.

“That is the last thing I can actually remember but apparently just past there, I overtook a car and the car turned right into me and knocked me off. I can’t remember a thing after that.

“The next thing I remember is waking up in the Intensive Care Unit the following day. When I woke up, the nurse asked me if I knew where I was. My reply to that was ‘I must be in the Borders General Hospital’, because of the surroundings, but I couldn’t remember how I got there and that’s when she told me I had been in an accident.”

Despite having no recollection of the crash, which happened on 17 July, Michael learned what happened from a police report.

He explained: “I was following a car, the car slowed down, indicated and then turned right – by that time I was almost past him. The car hit the pannier on the back of the bike, which knocked me off and I parted company with the bike and hit a telecom box by the side of the road, which is what did all the damage.”

The dad-of-two spent six days in hospital and has been on the mend at home, describing his recovery as “very good”.

Since then Michael has met the two paramedics who saved him, giving him a chance to thank the team.

Guy, one of the paramedics who came to Michael’s aid, explained: “It wasn’t until 24 hours later that we found out the true extent of his injuries. It was lovely to meet Michael and see he’s and making a full recovery; it’s always gratifying when we get thanked for what we do.”

Michael added: “I can’t be thankful enough, because they saved my life that day. I have always been in awe of paramedics, anyway; I believe they do an absolutely fantastic job and don’t always get the recognition they should.  It’s great to get the opportunity to thank them to their face.” 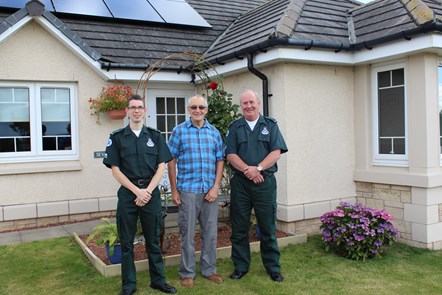