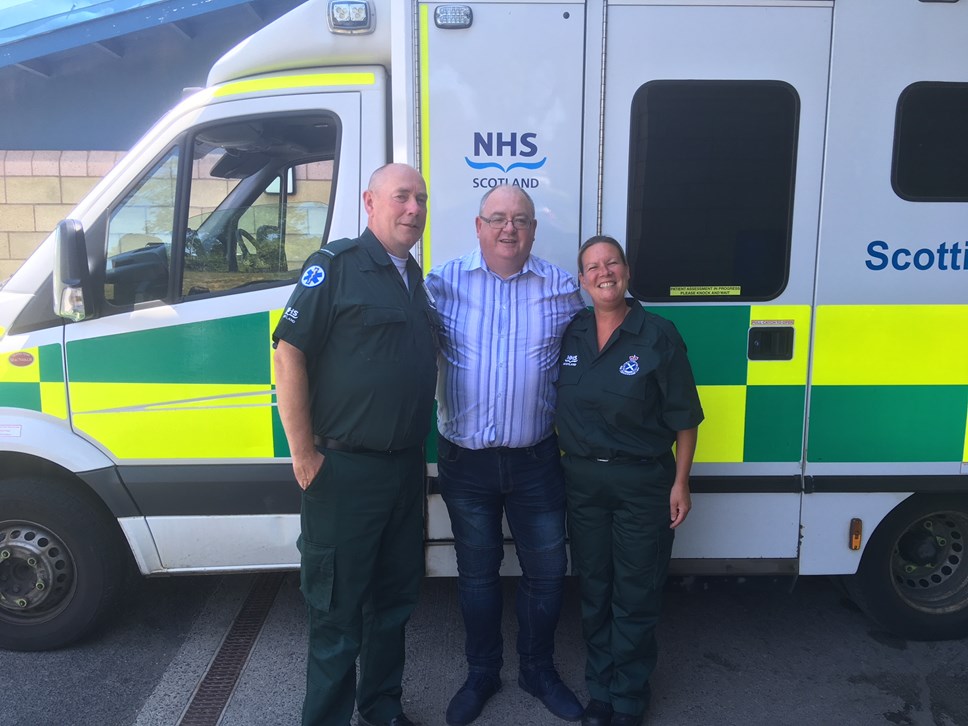 Man reunited with crew who saved his life

A MAN who had a cardiac arrest on a gym treadmill says he might not be alive today if not for the Scottish Ambulance Service.

Chris Hughes, of Barrhead, was at PureGym in Paisley working out. After his session, he went to do a warm down.

Within minutes, he had collapsed. Staff members and an off-duty GP provided emergency first aid until an ambulance arrived. He was shocked twice with a defibrillator used by gym employees.

The financial worker has now been reunited with the ambulance crew who helped save his life, saying his ambition now in life is to return the favour to someone else.

Chris, 53, said: “I went to the gym and I did my workout. I normally do my workout and then go straight to the car.

“Instead, I went to have a warm down, as I had trained quite intensely.

“I collapsed while I was on the treadmill. There was a female doctor who came out of the changing room.”

Two gym employees shocked Chris with the use of a defibrillator.

An emergency call had been made in the meantime to 999, which was taken by Nicola Cameron. A crew – manned by Gillian Bowie and David Clarke, both technicians at Paisley - was quickly dispatched by Constance O’Neill.

Chris added: “The next thing I remember is waking up in the ambulance – its sirens were going. I could feel how fast it was going. I was told I had collapsed at the gym and we are taking you to hospital.

“I said my brother is going to give me a lot of stick for this.”

Chris’ twin brother, Paul, is a paramedic, based at Paisley. He received a call from the hospital about what had happened.

Chris added: “I was very, very lucky that day. If it had not have been for the paramedics, I might not have survived – it’s quite overwhelming to think about.

“What gets me is that normally I would not do a warm down – I would normally go straight to my car. God forbid if it had happened while I was driving my car. That five-minute warm down saved my life – it’s hard to comprehend how close I was, I cannot believe it.”

The incident, which happened on March 17, 2016, was deemed to be a one-off, with Chris adding:  “It can happen to anyone at anytime. I am so shocked it happened to me. I did promise myself while in hospital, I would change my life.

“CPR should be taught in schools – everyone should learn how to do CPR. You never know when it could come to your own door, it could be your own family member. Even now, I still struggle to come to terms with what happened to me.

“I was always really, really fit, and thought my heart would never let me down – it’s pretty sobering when you think it could happen to anyone.”

One of the most distressing things for Chris was seeing his kids’ reactions to their dad in hospital.

He explained: “The most upsetting thing was seeing my son crying.”

Chris met up with the crew at Paisley Ambulance Station on Sunday.

Paul, team leader at Paisley, said: “As a colleague of theirs, I will never be able to thank them enough for their actions that night.

“Their work was absolutely fantastic. We go to a lot of calls which don’t have a good outcome. The work between the doctor, the gym staff, and the ambulance crew, really highlighted the affective use of the chain of survival. I am very, very grateful.”