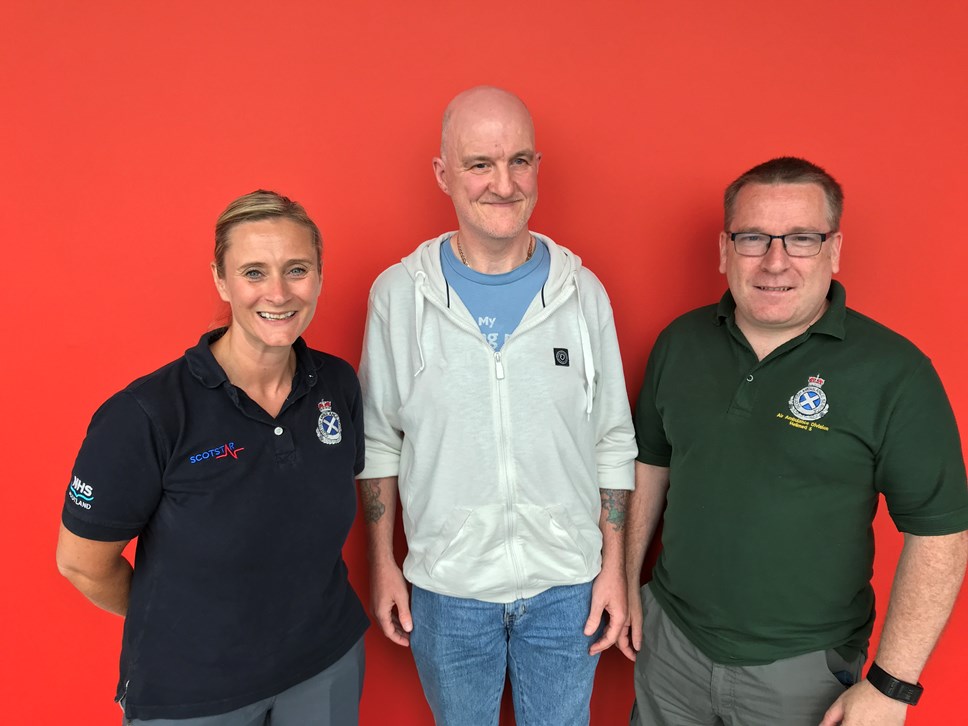 A man who shattered his bones after tumbling off a Scottish cliff was forced to crawl 70 meters from the rising sea tide to avoid drowning.

Ged Dunsmore was stranded for five hours after falling in a remote part of Iona and was only saved when a mystery dog-walker from America summoned the Scottish Ambulance Service.

“I fell 30ft and was in agony – on top of that I could see the sea was coming in so had no option but to crawl to safety. I thought I was going to die because of the remote location,” said the 52-year-old, from Helensburgh.

“The American guy, who I’ve never seen since, made an emergency call and within about half an hour, I was surrounded by various medics. I was lifted into a helicopter where I was taken to hospital.”

Ged’s frightening experience happened when he was out walking on the Isle of Iona in September 2014 but he was recently reunited with the Ambulance Service’s air crew, Julie Cathcart and Daniel Kerr. He’s also hoping to track down his mystery American saviour.

Speaking publicly about the incident for the first time, Ged said: “I was walking on the Isle of Iona. It was about lunchtime.

“I was walking on my own, and I knew I was elevated. I was walking along the shoreline and then I gradually got higher.

“At 1pm, I went to make a phone call to arrange something for the following week. I could not get a signal, so I decided to take a photograph. The time was 1.03pm. A few minutes after that, I fell off the cliff face.

“I fell about 20 feet to 30 feet; I landed on my left side and broke my pelvis, three ribs and my collarbone – my ribs had also punctured my lung.

With no one else in sight, Ged decided, with the possibility of the tide coming in, that it was best to move to a safer point.

Ged continued: “I could not stand up, and I was concerned about the water coming. There was no one else near. It was a corridor beach, with cliffs on either side. For whatever reason, I tried to make my way to the safe side of the beach.

“I did this on my knees – it was very painful. By the time I got to the other side, I was exhausted.”

He added: “I could not stand up and it had rained non-stop. I was pretty exhausted. I got to a point when I thought, ‘I’m done. I cannot do anymore.’ I had my peace with the world. I did not think I would make it; I was on the beach on my own and I accepted it.”

Ged said at about 6.30pm he saw a pair of legs at his side, asking if he needed help.

The American, who Ged has still never met to this day, rushed to make an emergency call.

Ged explained: “Within about half an hour, I was surrounded by various medics. I was lifted into a helicopter where I was taken to hospital.”

Ged was hospitalised for two weeks, the first of which he was in Intensive Care and he “can’t remember” much about the seven days.

He added: “When I was in hospital, my first thought was that I was going to miss a concert by Billy Connolly. That was my main incentive to recover.”

Since the incident, Ged, who is visually impaired, has begun walking independently again, adding: “I was off crutches by the end of 2014.

“I don’t think too much about my limitations – I never thought for a moment I would be in any danger. There’s not a day goes by where I don’t think, if not for their intervention, I would not be here today - they saved my life that day.”

Ged returned to the spot he fell a year after the incident, adding: “I had no idea how high it was, or how long I crawled until then.”

Scottish Ambulance Service Team Leader Daniel Kerr described Ged’s rescue as a “complex” incident from a clinical and aviation point of view, saying it was a difficult position to fly into.

“It was brilliant meeting up with Ged. What was miraculous about it was the fact someone else was walking their dog where no one else ever goes,” he said.

“Everything worked out well for him, but if not for the walker, he may not have survived. It was an absolute pleasure. That's why we do the job.

"But it's not just us. We can't do the job if it's not for every other person in the system doing their job well as well.”