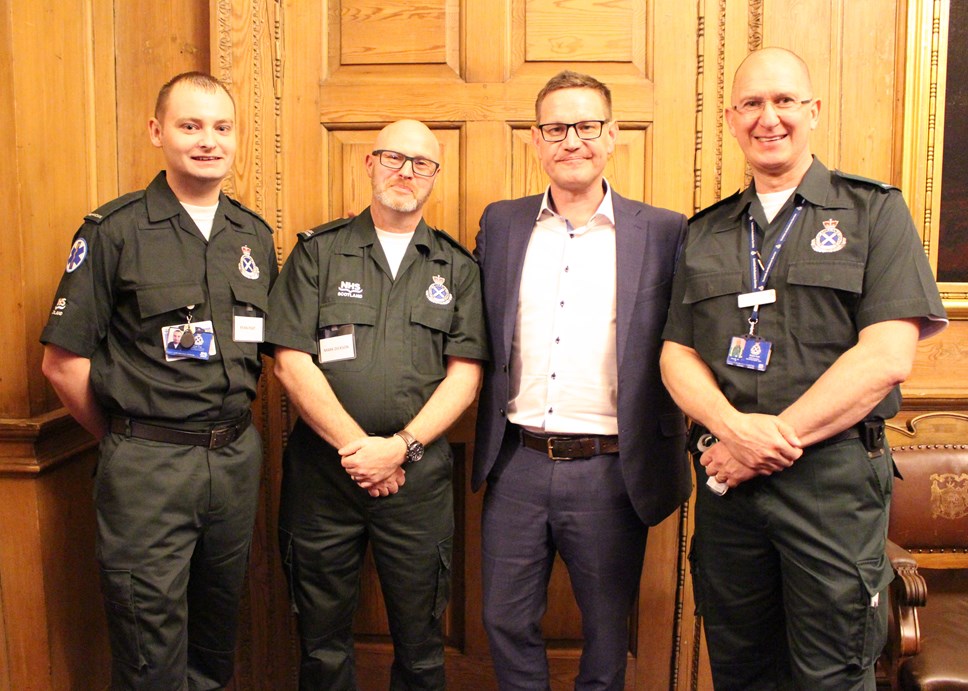 A man saved by a pet doctor after his heart stopped has been reunited with the Scottish Ambulance Service responders who saved his life.

Mike Pinkerton, 43, was shopping for cat food at Edinburgh’s Oak Tree Veterinary Surgery three years ago when he suffered a cardiac arrest, lost consciousness and collapsed.

“I still have absolutely no memory of what happened that morning,” said Mike, a communications manager at Edinburgh Council.

“It was fantastic to finally meet Ryan, Robin and Mark and thank them in person for doing such a great job – I know they’ll often never get the chance to hear from or about the people they’ve helped.”

The Edinburgh dad was recently reunited with the trio at a Civic Reception – held at the City Chambers – which celebrated more than 100 defibrillators being installed across the city, as part of St John Scotland’s ‘St John and the City’ project.

The event was held as a thanks to those who have responded to cardiac arrest emergencies; those who helped save the lives of Mike and those when helped save four other people – Paul Burns, Jeremy Southam, Donald Scott and Colin Mackay.

These five survivors have since gone on to collectively raise more than £22,000 for the defibrillator project - Mike alone has raised £9,180, which has so far funded six life-saving defibrillators, the latest of which will be installed on the top of Calton Hill.

Mike said meeting his rescuers was a great experience, adding: “As soon as I became aware of what had happened, I was desperate to meet Henrietta and the other staff at the vets – and we’ve stayed in touch ever since – but that wasn’t the whole story. I was conscious that I hadn’t ever thanked the paramedics who’d brought me back to life.

“It was good to be able to meet them and fill in a few more gaps. It was actually Robin’s first cardiac arrest so he had particular reason to remember me and my dramas. It was great for them – and the other brave lifesavers – to be recognised by the Lord Provost and St John Scotland at the City Chambers. It was a very special and moving evening.” 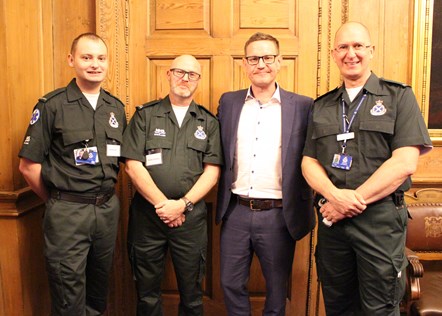