An 85 year old man who survived a cardiac arrest after collapsing in the street has spoken of his emotional reunion with one of the Scottish Ambulance Service (SAS) emergency responders who saved his life.

William Hoare was walking along Kenmore Street, Aberfeldy, when he collapsed. Four local children passing by, who had been on a Save a Life Scotland course, saw William in trouble. The kids who attended were Ewan Weber, Alastair Leighton, Scott Logan and Alexander McDougall.

The children recognised he was in cardiac arrest and called for an ambulance immediately. A traffic warden, who was also a first aider, then commenced CPR. A passer-by phoned Johnny Will, Clinical Effectiveness Lead for SAS and he was backed up by three other responders soon after.

The assistance William received highlights the importance of the Chain of Survival - early intervention, early CPR, early defibrillation, and post-resuscitation care – in the event of an Out of Hospital Cardiac Arrest.

Recalling the incident, which happened  in the summer of 2020, William said: “I remember absolutely nothing of the day of my cardiac arrest and nothing until six days later when I found myself in Perth Royal Infirmary in a ‘normal’ ward. That six-day gap had been filled with fitting of a stent, sedation, ventilation, my talking of much rubbish I’m told, time in ICU, and change of hospital. I was home after a further eight days or so having lost a lot of weight/muscle, with poor balance, very breathless, and food often not staying down. But my wife and my GP worked wonders.

“Nine months later, I was pretty much back to pre-arrest condition.  And now, after a further nine months, I’m brisk walking one or two miles a day. Hills are much steeper than they used to be, but I’m enjoying life and the beautiful world around me. I still win most of my share of competitive puzzles played with my wife so, in my view, my brain is relatively undamaged. I feel myself a very lucky man, thanks to everyone along the pathway from street collapse to now.

“I was delighted to meet up with Johnny, quite by chance, having understood from someone else’s conversation that he was a paramedic living locally. It was an emotional meeting I was pleased happened.”

Speaking of the incident Johnny said, after being alerted by the passer-by, he “ran to the fire station”, adding: “This is where the nearest community defibrillator is located and I was on scene delivering the first shock within 6 minutes.”

Trainee Advanced Practitioner David Jones, of Pitlochry, was next on scene and between him and Johnny, they managed to achieve a stable return of spontaneous circulation (ROSC).

Johnny added: “We were then backed up by paramedics Bob Ballantine and Kevin Thomas, of Pitlochry Station, who took over care of the patient and conveyed him to hospital where he made a full recovery with no neurological deficit.”

Of the meeting, Johnny said he was at the Aberfeldy Christmas market last year raising money for Tayside Mountain Rescue when “this gentleman approached me”. Johnny explained: “He said ‘are you the Paramedic who resuscitated me on Kenmore Street 18 months ago?’. I said ‘my goodness you look better than the last time I saw you’ and he gave me the most heartfelt thank you with tears in his eyes. This was an incredible chain of survival story.” 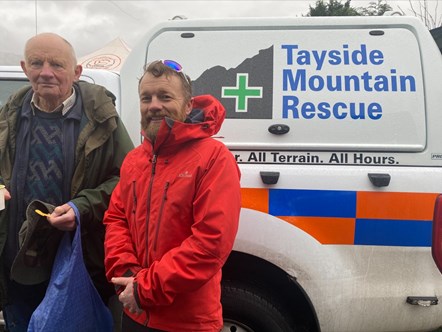