Motorbike rider "lucky to be alive"

An HR worker who thought he was going to die after flying from his motorbike after a collision with a van has praised the SAS emergency responders who came to his aid.

Chris Prior, who works in Glasgow, was travelling home to Skye on Friday, June 15 (2018), when he came flying off his Kawasaki Ninja motorbike.

The 42-year-old said there had been an accident in Loch Lomond, forcing him to take a “massive detour”.

He explained: “I was in a long line of traffic and moving really slowly. I manoeuvred out and I drifted out behind a car.

“Just as I popped out to have a look, a van – coming in the opposite direction - glanced me on the side and hit me.

“I flew off the bike and flew half the width of the road and into a crash barrier, and landed in a heap.”

Chris said an off duty doctor and another member of the public, both travelling home at the time of the accident, came to his aid initially.

He explained: “There was another person, a member of the public, who also assisted. They both made me comfortable.”

They called 999 and an ambulance was dispatched by Katrina Oag, after the call was taken by call handler Nicola Downes.

Chris said both the air and road crews arrived quickly, adding: “I thought, this is going to take ages, but they were there quite quickly.

After being given pain killers, Chris was put in the back of the ambulance.

He added: “It was painful, but it was in fits and starts. Initially, I did not feel a thing, but after that, every time they moved me, it hurt. It was quite bad.”

Chris was airlifted to Raigmore Hospital, where he spent four nights. While in hospital, he had his hip operated on.

“I had never broken a bone before, and never had an accident before. I have been riding for 24 years.

“I just remember a massive bash – I thought I was going to die. I remember flying through the air, but I cannot remember hitting the crash barrier. It was all quite scary.

“I want to say thank you to the paramedics – I am so lucky to be alive.” 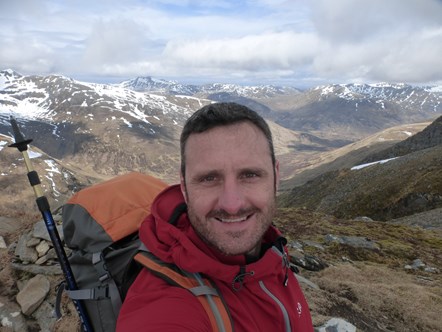