Jennifer McEwan, of East Kilbride, has spoken of the moment her two-year-old son was rushed to hospital.

The 33-year-old mum was at home with her two children, Jacob and Theia, aged one. She said Jacob had been experiencing cough and cold symptoms, before he started to experience breathing problems.

Jennifer, a nursing tutor, said: “He deteriorated quite quickly; he had symptoms of a cold and was starting to get worse – he was struggling to breathe.

“I phoned 999 and an ambulance came out – the call handler was fantastic.”

Derek Henderson and Brian Walker, both based at East Kilbride Ambulance Station, were dispatched and arrived within minutes of the call around 5pm on November 4.

She meanwhile also had to look after Theia.

The crew “blue lighted” Jacob to hospital, where he was rushed into the A and E department at Hairmyres.

Jacob was then transferred by Sandra Stark of the ScotSTAR team to the Royal Hospital for Sick Children, where spent 10 days in intensive care, including four days hooked up to a ventilator.

Jennifer added: “Sandra interacted with Jacob superbly. At no point, did we not know what was happening. We were kept informed at all times and it cannot be overstated how important that was.”

Jacob was discharged on 14th November 2018 and has since made a return to nursery.

He was diagnosed with having croup and RSV - a normal childhood virus - described by Jen as a “very heavy cold”.

She added: “Jacob is healthy but he just drew the short straw. I just want to say a massive thank you, but a thank you is a massive understatement. It’s not just a daily job, it’s doing life changing things on a daily basis - the quick response made a big difference.

“Everyone's professionalism and knowledge put me at ease and I have no doubt without their rapid care, things would be significantly worse.

“He made a big difference to Jacob. Once we were in the ambulance, Derek sat with Jacob, while Brian was driving. He gave us the heads up if there were any bumps.

“Derek was talking about normal things. Everything was very well controlled, and it made a big difference to Jacob.

“I was with him the all time. Derek and Brian stayed with me to make sure we were settled.

“Derek stayed with Jacob, Jacob was happy Derek was there. They were great, not just having to deal with me they talked to my mum, who we had met at the hospital, and spoke to her.” 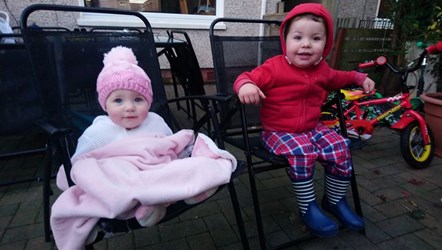