A mum has thanked the two “amazing” emergency responders who took care of her seven-month-old baby after he broke his leg.

Louise Middleton, of Huntly, was on her way to collect her husband, Ross, from work. She was holding young Leo when she tripped and fell.

Describing the incident, Louise said: “I was carrying Leo, who was then seven months and three weeks, in my arms to the car. I got out the front door and for some reason I tripped. I just kept thinking ‘protect his head, protect his head’.

“I twisted to take the fall so Leo's head wouldn't hit the step but in doing so I must of landed on his leg as I pulled him away from the step. He was crying and I was in shock. I came back inside, checked him over and I noticed a small scrape on his left knee but nothing else.”

She said she called her husband, Ross, who was at work and after explaining what happened, he quickly headed home.

Louise added: “When Catherine and Paige arrived they checked over Leo and gave him some Calpol, it was decided that a trip to Royal Aberdeen Children’s Hospital would be in order as Leo was sore around his leg when touched. Leo was in his car seat while I was fastened in to the bed so I could see him.

“Paige and Cath  were amazing and took care of us both whilst on the way to Aberdeen, even seeing if they could meet a paramedic to give me an anti-sickness jab.

“Up on arrival the ladies were fantastic.  They booked Leo in and made sure we were settled before they left. I can't thank them enough.

“They were both so caring and understanding and I couldn't have asked for any more from them.. Leo unfortunately did break his leg - it is a femur break. The staff at the hospital were also amazing and really looked after us

She said Leo now was doing “great” and recently had his cast off. 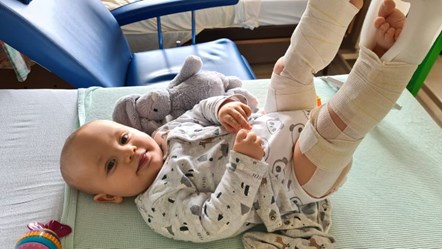