A young mum says she will be forever in debt to the Scottish Ambulance Service staff who saved her baby’s life.

Rachel Moynes, of Shetland, got in touch during the Coronavirus Pandemic to pay tribute to the staff who assisted her during the “terrifying experience” - including three staff members who volunteered on Christmas Day to fly her to see her newborn.

Rachel, 23, a welder, explained that Evie-Mae was suffering from a lack of oxygen getting to the baby.

A team from Lerwick Ambulance Station, which included Jane Mott and Kaylee Garrick, was quickly dispatched.

Rachel added: “She was ventilated right away and her treatment began with the amazing team in Shetland while they waited on the air ambulance team to arrive – which came very quickly.”

Rachel said: “They wouldn’t move her until she was stable. The team that came up to get her was super supportive, talking to us constantly about her condition and what would happen – the Shetland team were very supportive as well.”

Evie-Mae was then transferred to the air ambulance with Rachel’s fiancée Michael, 29, also a welder. Rachel wasn’t allowed to travel, as she had just given birth, and Michael and Evie-Mae were transferred to the neonatal unit in Aberdeen around midnight

Rachel added: “I was then told that I may not be able to get a flight to see her until Boxing Day which, as you can imagine, was terrifying as she was extremely poorly. But then the midwives in Shetland told me that a team had volunteered to come back up for me on Christmas Day so I could be reunited with my baby girl sooner, which I’m incredibly grateful for.”

Evie-Mae, with mum and dad, then spent just under three weeks in high dependence care in Aberdeen until the couple was allowed to take her home to meet her brother, Caleb.

Rachel said: “So far she’s meeting every milestone and growing just like any other baby - it’s still early days but if it hadn’t of been for the teams in Shetland, the team that transferred her to Aberdeen and the team that looked after her in Aberdeen, she wouldn’t be here; we could never repay them all for the amazing work they done. Without these amazing services and staff, my little girl Evie-Mae would not be here today.

“You made us feel so safe in such a difficult time. To everyone who helped we have no way of ever thanking you all and we will forever be in your debt and we wish we could thank you in person.” 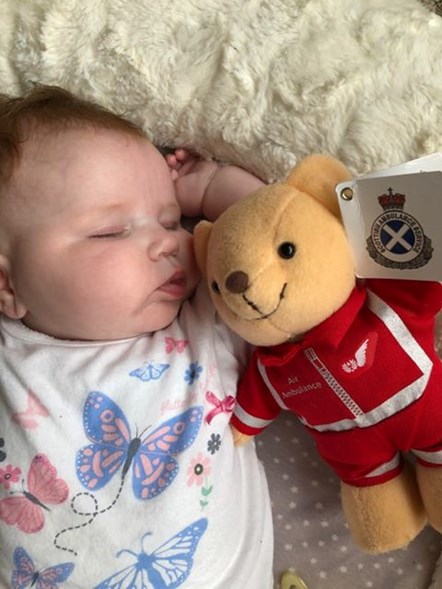