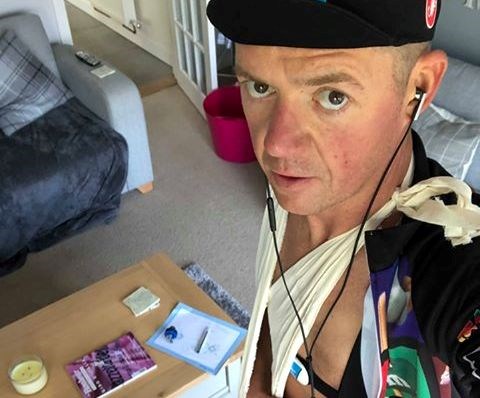 A man who broke his collarbone after a high-speed push bike crash has described the Scottish Ambulance Service crew who came to help him as “fantastic”.

Craig Breetzke, of Buckie, Moray, came off his bike near Maggieknockater, near Aberlour, on May 17, around 4pm. He said he immediately knew he had broken his collarbone.

The 40-year-old added: “I knew that I had broken a collarbone and would require assistance as I was a fair distance from home and on my own.”

Craig, an offshore storekeeper, added: “I immediately got through to a very helpful and reassuring voice of the staff member on duty at the dispatch office.

“She got all my relevant location details as well as talking me through what to do and helping me remain calm - she told me the ambulance was en route and that she would stay on the phone until they arrived.”

In the meantime, an ambulance crew from Huntly Ambulance Station was dispatched to the scene, staffed by Darren Tomlin and Michael Taylor.

Craig explained: “It was only about 10 minutes before I saw the much welcome sight of the ambulance with the team of Mike and Darren.

“They were fantastic and tended to me very professionally and swiftly. Once the pain relief had been administered and they had secured me comfortably, as well as my pride and joy bike, and we got under way to A&E at Dr. Gray’s Hospital in Elgin where I was handed over to yet another extremely good team that took over from the two paramedics.

“I just want to say a really huge thank you to all those involved from the initial call right through to the A & E staff at Dr Gray’s.”