The daughter of a pensioner left paralysed after falling down the stairs said her mum wouldn’t be alive today if not for the Scottish Ambulance Service.

Maria Anderson, of Gallowhill, had been at her daughter Karen’s 50th birthday party.

Karen, of Paisley, has spoken of the moment she feared her mum would die after the 71 year-old’s horrific fall following a night of celebrations.

Karen, who works for Renfrewshire Council, said: “She was at home and had been at my birthday party. She had got home at around 2am. We had taken her in, and asked ‘do you want me to take you in?’

After about two hours, the cat made a noise. Maria decided to let the cat out.

Karen added: “It was about 4am, and she got up to let the cat out, and then fell down the stairs. It was about the fourth or fifth stair down.

“I think she tried to reach back to grab the handrails, and landed full force on her head.”

Karen said her dad Andy – who was totally “traumatised” and “distressed” by the incident - made an emergency call, being the only one at home with Maria.

Upon their arrival, they got Maria on the spinal board and made their way to Royal Alexandra Hospital in Paisley.

Karen added: “She was put in the accident and emergency department’s crash room. She was in there first, and then she was moved into intensive care.

“I jumped out of my bed, got my jeans on and went to the hospital. I’m about five minutes from hospital - my initial indication was that she was not going to make it.”

After spending five days in intensive care after the incident on June 17, Maria was relocated to the hospital’s ward 32 – the orthopaedic ward – where she recovered.

Karen added: “Right at the outset, we were not sure if she would regain anything. We initially thought she would be paralysed from the nipple line down, but is from the groin down. It’s more positive from what we had before.

“Doctors said ‘we need to be honest with you – it’s highly unlikely she will pull through’. It was horrible, and very surreal.”

After a few days in a coma Maria “started to respond”.

Karen added: “She started squeezing our hand and was answering questions.”

Karen that she started to breathe at more regular intervals and she was soon able to converse with the family, with Karen adding: “She has no recollection of what happened.

“She regained consciousness on the Tuesday. She said, when she woke up, ‘I’m an awful woman, I’ve given you too much hassle.”

Maria returned home from hospital in August where she is still recovering.

Karen said: “We are glad that she is still with us.  If the paramedics had not been there and did what they did, she would not be here today. She was teetering on the brink of death.” 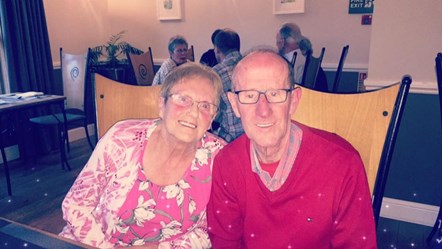