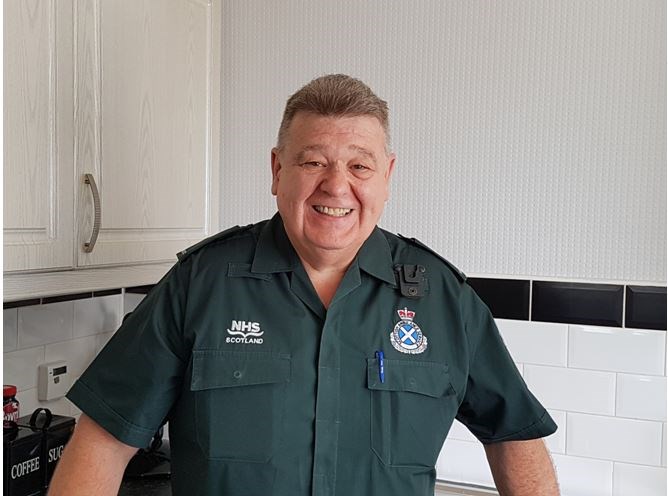 The prestigious honour–which acknowledges ambulance personnel who have shown exceptional devotion to duty, merit and conduct - has been awarded to Pat McGrattan, originally from Springburn in Glasgow, now based at Kirkintilloch.

Pat, 63, first joined the service in 1983, starting as an ambulance care assistant, and qualified as a technician in 1985, before becoming a paramedic in 1991.

For the past 18 years, Pat has been volunteering his time every second Sunday to teach people attending one of SAS’s training colleges – ranging from ambulance care assistants and technicians to paramedics – a range of information to prepare them for their exams. This includes formal lessons and practical demonstrations, and allows those attending to prepare at their own pace. He also supervises student paramedics through their probationary period.

Pat said he was notified of the award on Tuesday via a letter, but assumed it was a joke.

He added: “I thought someone was winding me up, I thought it was one of my students. It was just too hard to believe, at first. I thought no one would send me anything like this. It was just totally unbelievable, very surreal.” Pat said his brother-in-law, a Captain in the Scots Guards, saw the letter and confirmed it was real. Pat added: “I thought, ‘I am just a paramedic’, I can’t receive a letter like this. I was just speechless, and I still can’t believe it. I don’t feel like I deserve this. I feel like I haven’t done anything – I just try to help people throughout their training. “I give them a helping hand and it also keeps my skills up to date, which is quite hard to do. This is something I hope helps other people, but it helps me as well. I feel quite numb and I think it will take a while for this to all sink in.” The first people Pat was told was his immediate family, including his sister, brother and son, and added: “My sister and brother were elated – my sister was in tears.” One of the best things for Pat was receiving thanks from people who have passed their respective course, with the paramedic adding: “When they come back and say ‘I really appreciate what you have done’, that is reward enough. They don’t have to come back and thank me, but it’s nice when they take the time to come and thank you.” Over the years, Pat has said he has “worked at just about every station” in Glasgow before settling at Kirkintilloch, where he has been for the past 20 years. Despite possible plans to retire next year, he hopes he might be able to continue in his volunteer role. He added: “Hopefully they may let me continue to come in on Sunday.” Of his role with SAS, he said: “I just really enjoy my job. Seeing people become paramedics and beyond, it’s a good feeling to know you have helped someone along the way. “There’s been so many people who have helped over the years and supported me, there’s too many to thank – it’s been absolutely great.” Scottish Ambulance Service chief executive Pauline Howie said: “I am delighted that Pat’s commitment to helping educate and train his colleagues has been recognised in this year’s honours. “Pat has voluntarily mentored thousands of people over the years. He does this in his own time and has made sure people have the best, up-to-date knowledge for passing their qualifications. Pat is a role model and very respected paramedic. “This prestigious honour is a great testament to Pat and all the people he has helped over the years.” Area service manager Kirstin Mullan said: “Pat has been providing education classes and mentoring to students and probationers, including potential paramedics, for at least 20 years on every second Sunday afternoon in Kirkintilloch. “The numbers of staff who have benefited from his teaching and experience are well into the thousands. He has done this in own time, using his own materials and he is an absolute credit to the Scottish Ambulance Service. This award is so well deserved.” In the coming weeks, Pat said he will receive an invite to attend a ceremony at either Holyrood or Buckingham Palace to receive the award. 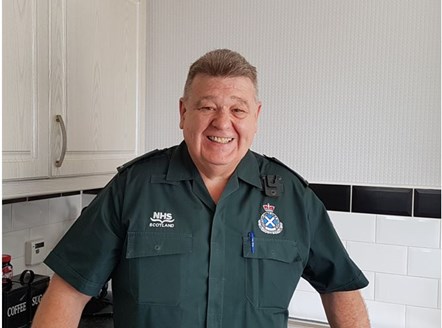