An Ambulance Control Centre (ACC) Call Hander for the Scottish Ambulance Service has been named UK Emergency Medical Dispatcher of the Year, following his involvement in helping deliver a baby over the phone.

Neil Hardy, who works as a call hander at East ACC, was presented with the prestigious award at UK Navigator, the International Academies of Emergency Dispatch (IAED) conference.

Neil was praised for his role in saving the life of a mother and newborn baby, after receiving a call from the father, who was driving to hospital on the motorway. The mother had gone into labour in the back of the car, and Neil provided instructions over the phone for the father to deliver the baby at the side of the motorway, all the while helping to keep him calm. However the baby came out feet first, and was not breathing when delivered. Neil instructed the father to clear the airwaves and administer CPR and when the crew arrived the baby was breathing, and both the baby and the mum, made a full recovery.

Neil said: “Being nominated for the award of Emergency Medical Dispatcher of the Year by my colleagues is extremely humbling. To have been selected by the IAED as the 2021 winner is an amazing personal achievement as well as a huge reflection on all of us within ambulance control in Scotland.

“Within the ACC it’s acknowledged that assisting with the delivery of a baby over the phone is one of the most challenging calls to take. In this particular case there were added complications with the birth, including the limited space of a car backseat on the side of a motorway.  Later finding out that both Mum and Baby have recovered and are doing well is hugely rewarding and reflects on the efforts and expertise of the whole team involved in their care.

“Emergency call handlers are the first ambulance response to patients calling for help and I am proud to be part of the team that does this in Scotland.”

Pauline Howie, Chief Executive of the Scottish Ambulance Service said: “Our call handlers are the first line of contact between patients and the ambulance crew, and their knowledge, experience and ability to keep calm under pressure can make such a difference to patients and save lives. I’m so proud of Neil Hardy for his actions, and this award is testament to his dedication, and of the ACC as a whole, in providing care to patients across Scotland.” 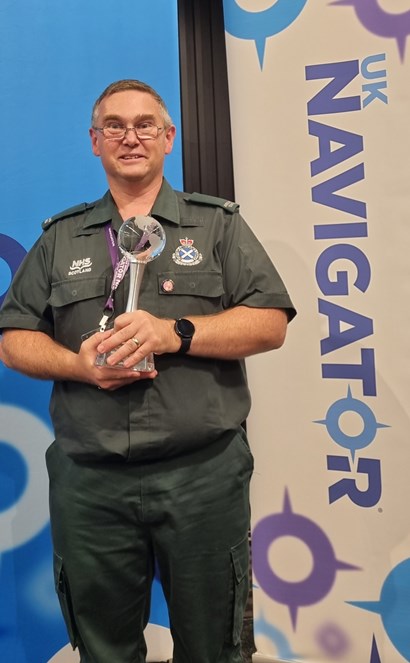